Dreams of swords and honor!

Great new female hero. Slater's writing reminds me a tad of Sarah J. Maas with a dash of Tamora Pierce.
A tried and true theme with a difference. Young woman (of noble birth) wants to be a Paladin, lives for sword fighting, and definitely doesn't want to be married off to decorate someone's holdings and birth the required heirs.
Disguising herself as a boy, Sam (Samatha) heads off to paladin headquarters to try her luck.
(I've got to say that all that breast binding and then hiding how the the 'call of nature' impacts differently for women would wear me out, let alone holding my own in sword fighting against a hulking successful Paladin. How did she get away with it? Privacy would not be the first thing on the travelling Paladins' minds).
She succeeds. An unforeseen circumstance--her co-trainee Braeden is a half demon. Her trainer, her hero from her past, Paladin Tristan Lyons, First of the Sword.
Training, fighting demons, following the High Commander's bidding, and the continued battle to disguise her gender do take a toll, as does entering the enclave of a rival organization, The Uriel. It is feared that they seek to oust the Paladins. Sam  and her team find more than they'd bargained for. Frighteningly more! The Paladin are in trouble!
Well written, Sam's story exercises such a pull that you soon find yourself deep into the action and just snarl at having to face the day's busyness. A feisty young woman who won't settle for any less than she feels driven to do. Translate that drive to today's young women and here's a message for all to follow their dream. They can come true! 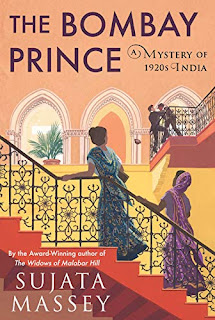 The Bombay Prince (Perveen Mistry #3) by Sujata Massey              ⭐️⭐️⭐️⭐️⭐️ As always Preveen Mistry, a Parsi separated woman (unheard of), is an energising force as she quietly, yet forcefully, undertakes the various cases she’s given as a solicitor in her father’s law firm. The time in history is interesting. It’s 1921 and Edward, the Prince of Wales is visiting Bombay as part of an extended royal visit. Unrest is in the air. The Independence Activists want changes. The British authorities are concerned about possible attacks on the Prince and his entourage.  Preveen has been consulted by a young female student, Ferny Cuttingmaster, from the prestigious Woodburn College where her friend Alice Hobson-Jones teaches. Freny seeks legal advice for the College’s Student Union around activism. What she doesn’t foresee is that Freny will be involved in a fatal accident, and the more Preveen delves into the aspects of that, the more likely it appears that it might have been deliberately c
Read more 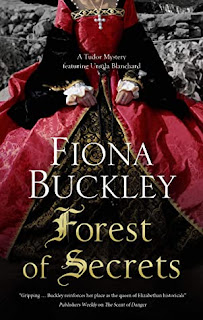 Forest of Secrets (Ursula Blanchard Mystery #19) by Fiona Buckley                ⭐️⭐️⭐️⭐️ 1586, Ursula Stannard (Blanchard) once again does Sir Francis Walsingham’s bidding—and by extension her half sister’s, Elizabeth Tudor. This time she’s investigating rumours of pagan rites in a forest (brought to Ursula’s attention by a dame from the remote village of Chenston), and how that might or might not relate to Walsingham’s enquiries and lures around rumours of a plot being hatched by Mary Stuart against her cousin Elizabeth. Ursula is pointed straight towards Mary, albeit via a devious path. Of course she’s also once more overseeing the education of her newest companion, a young gentlewoman of a Puritan background whom we met in the last story. I find I don’t really trust this particular young woman, Mildred Gresham. She is too eager to walk her own path, often unwisely. Like the last adventure, we end up deep in the forests of England, in an out of the way village, where intermarriage
Read more

'fate had cast them as enemies from the start' 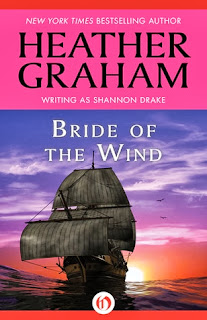 Bride of the Wind by Heather Graham OK first let me 'fess up. I really am not too much of a fan of Pirate type romances. Well, an exception is Beauvalet by Georgette Heyer. But then Heyer is always and forever an exception. The last pirate romance I read just didn't do anything for me. So with those those riders let me go forward. Set during the Restoration period, 'Bride...' was off a rollickingly start complete with a pirate attack by the dreaded pirate Dragonslayer. Our heroine was predictably feisty and demanding, afraid but not cowered. The dreaded Dragonslayer/ravisher's entry into the cabin was again pretty predictable. Shades of avast there etc. I thought uh oh! pirates again! Thankfully, all those preconceived ideas were to change. We were given the backstory. The cast: The Betrayed and Misguided Hero: Lord Pierce DeForte, Duke of Werthington, turned infamous pirate Dragonslayer and hot for revenge against the woman who betrayed him mos
Read more